I have been asked to comment on our new acquisition of our 1968 Buick Wildcat Convertible and why this vehicle brings back so many personal memories. Well here it goes:

This car was born in 1962 as a luxury package to the Buick Invicta and by 1965 was evolving into a huge Electra Custom Series and sold for about $3600.00. Although 1965 was a big year for the Wildcat, for me, I learned to fly an airplane at the ripe old age of 14 yrs.

I used to work at the local airport in Naples, Florida where I helped service aircraft for the wealthy owners of beautiful airplanes and cars, one owner in particular, had a 1965 Wildcat and we certainly had some adventures in his vehicle. He was also a great flight instructor.

By January, 1968 both the Wildcat and I had grown. The 1968 version had a 430 cid/360hp 4bbl engine for power. I was flying regularly having soloed on my 16th birthday the year before. My family moved to Sarasota so I left my flying buddies behind in Naples to tackle the remaining two years of High School in Sarasota, but I continued to fly and develop and joined the Air Force ROTC and continued to train extensively.

Its funny how I finally realized that our Sarasota neighborhood was experiencing the losses of family members in Vietnam. Indeed my only friends elder brother was lost the year before and my friend had occasional behavioral difficulties in school.

January started out with the light at the end of the tunnel, later that month Laugh-In debuts and ran until 1975 where Saturday Night Live kicked in. North Korea seized the USS Pueblo and imprisoned its crew, and lastly, the Tet Offensive showed the country we really were losing the Vietnam War-and my friends brother was gone for nothing. Walter Cronkite later that month confirmed what we already knew.

In February, two black Memphis sanitation workers were killed in a freak accident with their garbage truck. Their deaths led to a strike that became the civil rights movement.

March was about politics, it was an election year. Both Nixon and McCarthy won their respective New Hampshire primaries which fueled Bobby Kennedy’s entry into the political arena. Then, President Johnson announced he would not run for re-election, then it got really scary.

On April 4, 1968 Dr King was assassinated in Memphis while supporting the garbage strike and the whole country went up. By May the world followed, labor riots in France, mass starvation in Biafra, Russia started preparations to invade Checkoslovakia, Draft Cards burned and the Supreme Court ruled it was not ok to actually burn them either.

June 4th saw Bobby Kennedy win the California democratic primary and also his assassination in Los Angeles, and on June 8th I turned 17 and got my Draft Card and number 007, so I had a year to determine Air Force, College or the War. James Earl Ray was also captured in London and extradited to the US for Dr King’s murder.

In August Hubert Humphrey was nominated to be the democratic nominee for President without ever participating in a primary election, power had spoken and once again, the country went crazy in Chicago. In Mexico City two African-Americans were stripped of their Olympic gold and bronze medals for raising gloved fists during the national anthem.

In November, Nixon won the election, Shirley Chisholm of New York became the first black woman ever elected to the US House of Representatives. After 260 years, Yale went co-ed, 78 West Virginia coal miners died which led to regulation of the mines, the teaching of evolution in Arkansas schools was deemed legal by the Supreme Court, O.J. Simpson won the Heisman Trophy, later auctioned off for $225,000 in 1999.

By December the country and world were exhausted and so was I. I spent a lot of time in the second half of 1968 flying back to Naples to fly and drive my friends new 1968 Wildcat, black on the outside, white on the inside and a convertible as well. What fun we had.

On Christmas Eve I watched the Apollo 8 astronauts beam a grainy black and white photo of the earth rising above moon and recite passages from Genesis. I was struck by how small the Earth was, and the last thing one of the astronauts said was Merry Christmas to all on the Good Earth.

Just when you thought 1968 was finally over it wasn’t. The Beatles broke up too. But, FM radio was here and they were playing entire albums with no commercials , wonderful. My Naples friend called me and invited me back to the Naples beaches and said there was a new English band that was way better than the Beatles, born from the Yardbirds. For the few months we had left of our growing we had girls, booze, beaches, and Good Times, Bad Times, generally Dazed and Confused in his 1968 Buick Wildcat Convertible.

The 1949 Pontiac Chieftain “A knockout” 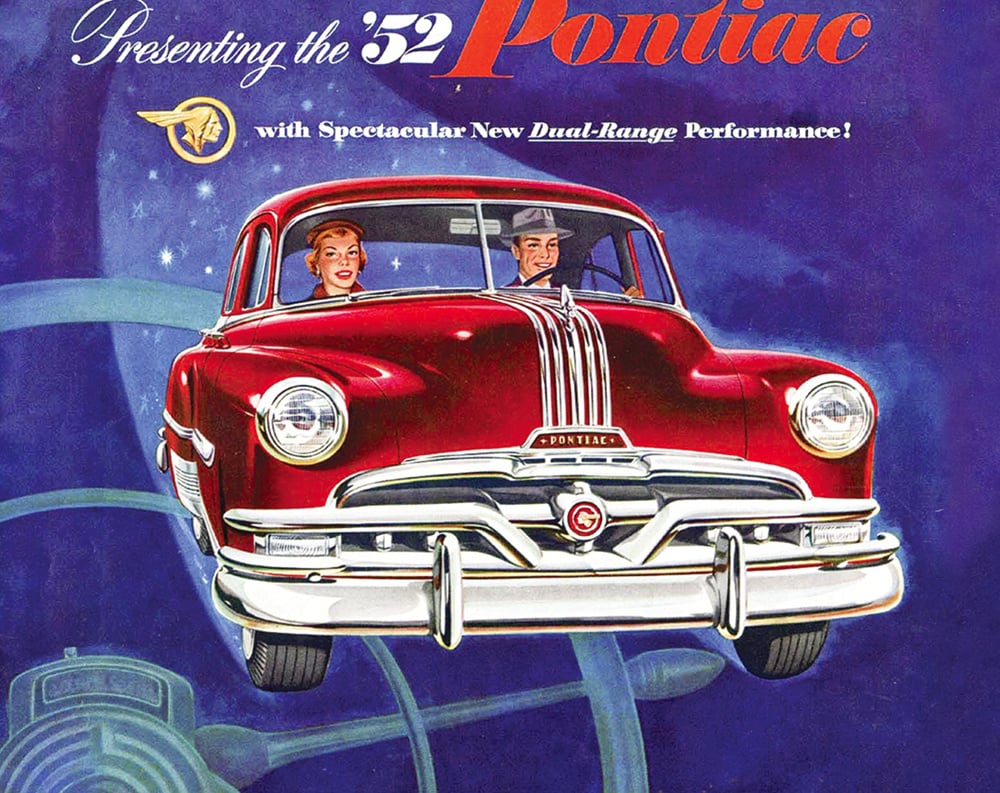 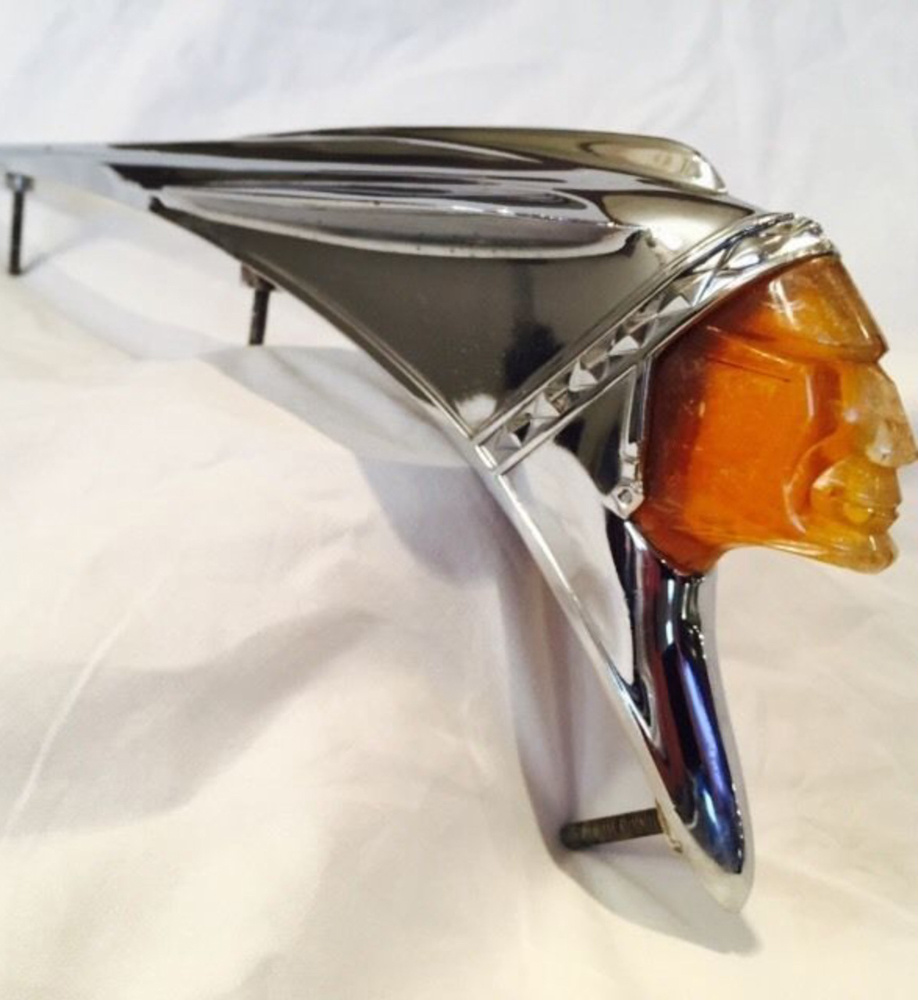 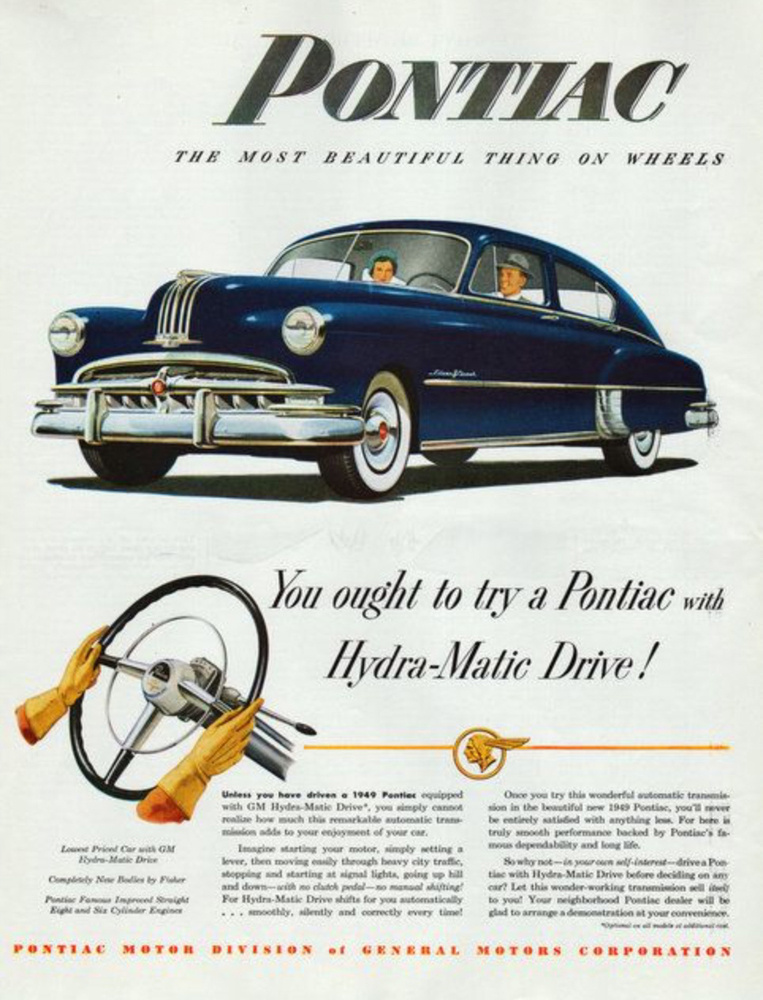 Named for the Ottawa chief and produced in the town of Pontiac Michigan, the Pontiac Chieftain was produced from 1949-1955,

Described as the “cream of the crop” of GM ‘s  offerings, the 1949 style was the first totally different car from the postwar and not a prewar design with slight alterations.
Had the design of the Chieftain not been a knockout, Pontiac would have been in big, big trouble in the coming decade.

It was a knockout design with its origins focusing on aerodynamic design to generate less drag through the air.  Its aerodynamic design made the car much faster at speed very stable with little wind buffeting. The Chieftain was the start of something big for Pontiac and the design paved the way for the exciting Pontiac muscle cars of the 1960’s.

Hailed as a driver for a 100,000 miles “ the Pontiac Chieftain of 1949 was designed by the team headed by Herman Kaiser and featured body cues of a lower body line and the rear end styling being incorporated into the body . Chrome everywhere!

The 1949 also changed the driving public’s preconception of the Pontiac as a middle aged drivers car and went after the young returning soldiers. Sleek, chromed and sexy.

These returning soldiers, known in the countries they defended as “over sexed , over paid and over here”  had survived a world war and the mood of the country had changed. They created the huge Baby Boom Generation (Likely in the huge back seat of the Chieftain).  Their youth and enthusiasm powered the USA to super power status. They were buying! Truly the “Greatest Generation.

If you would like to experience this game changer of a car, contact us for a drive, tour, wine trip or anything you want . You may also catch a small glimpse of her in the upcoming Film Summer of Snakes. 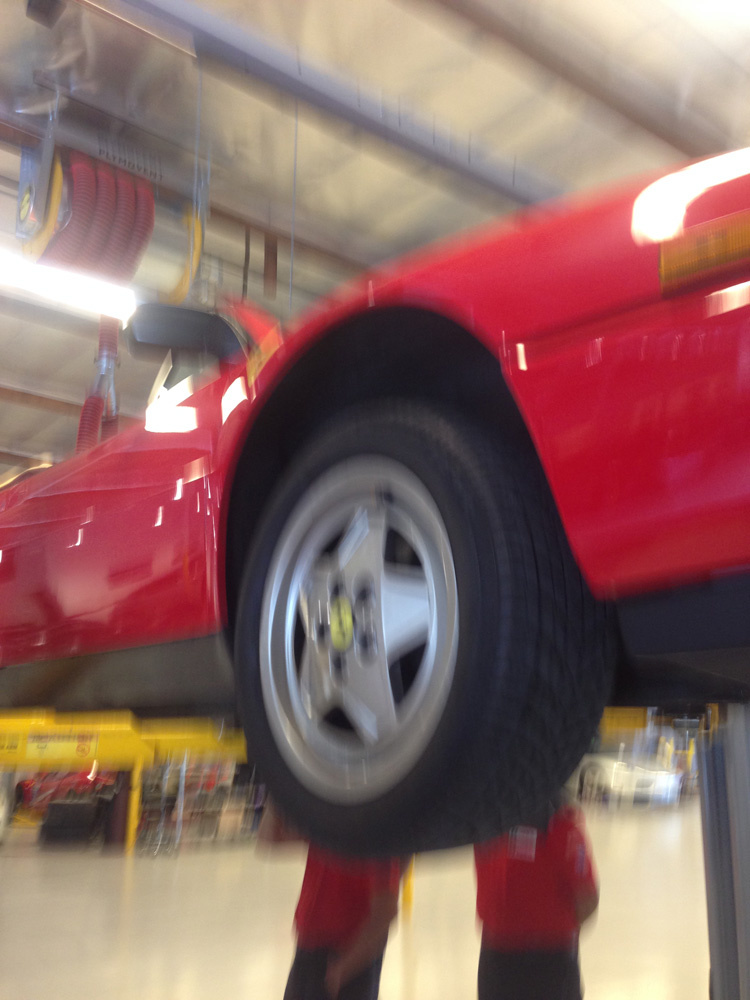 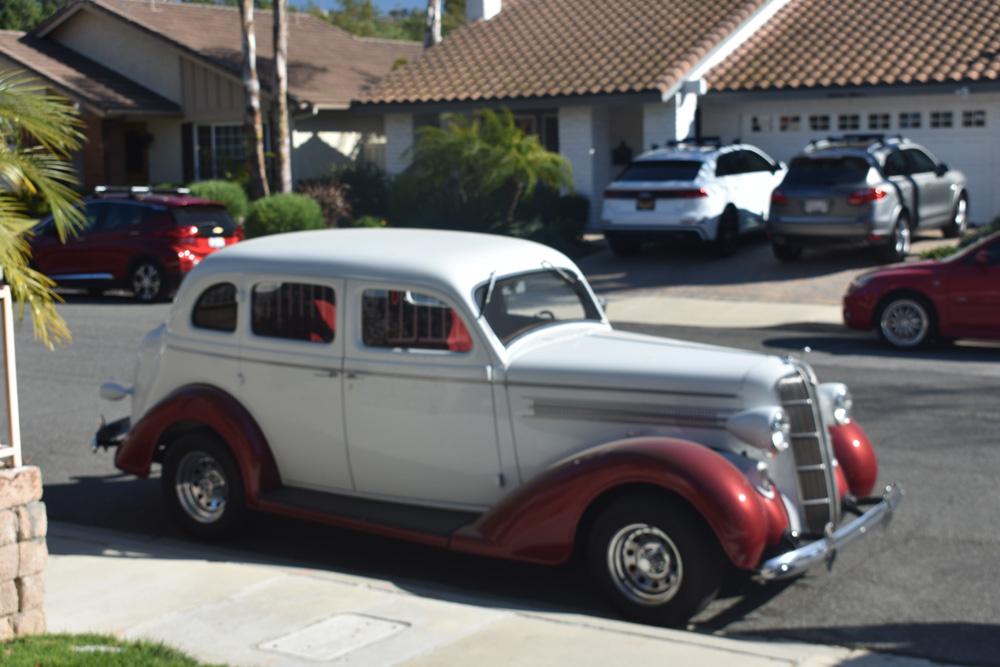 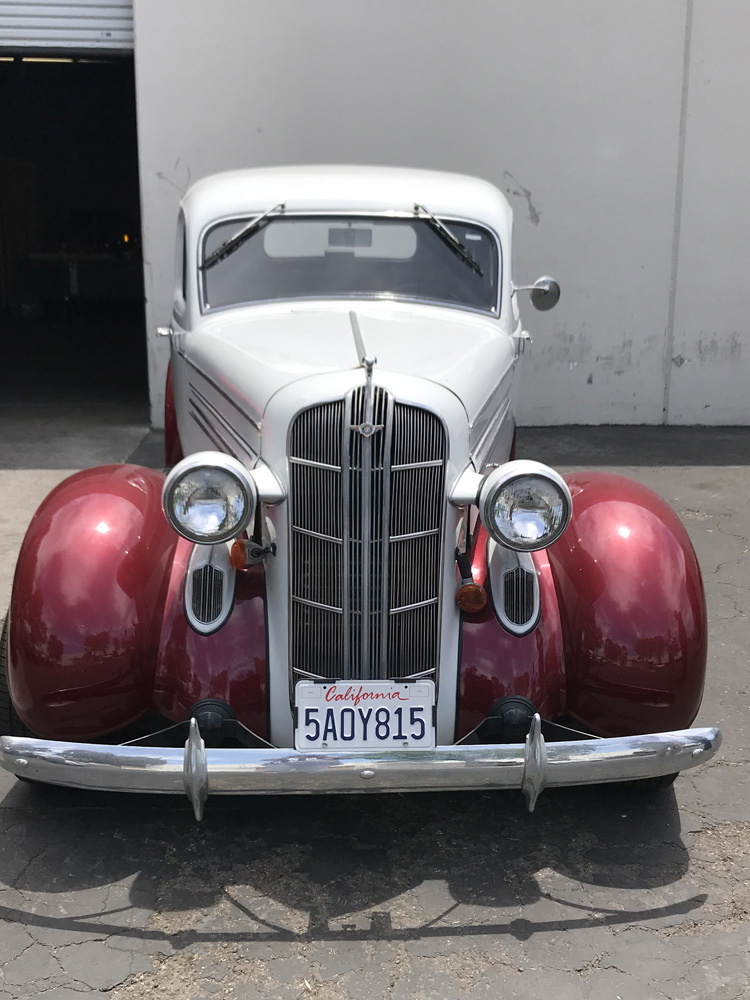 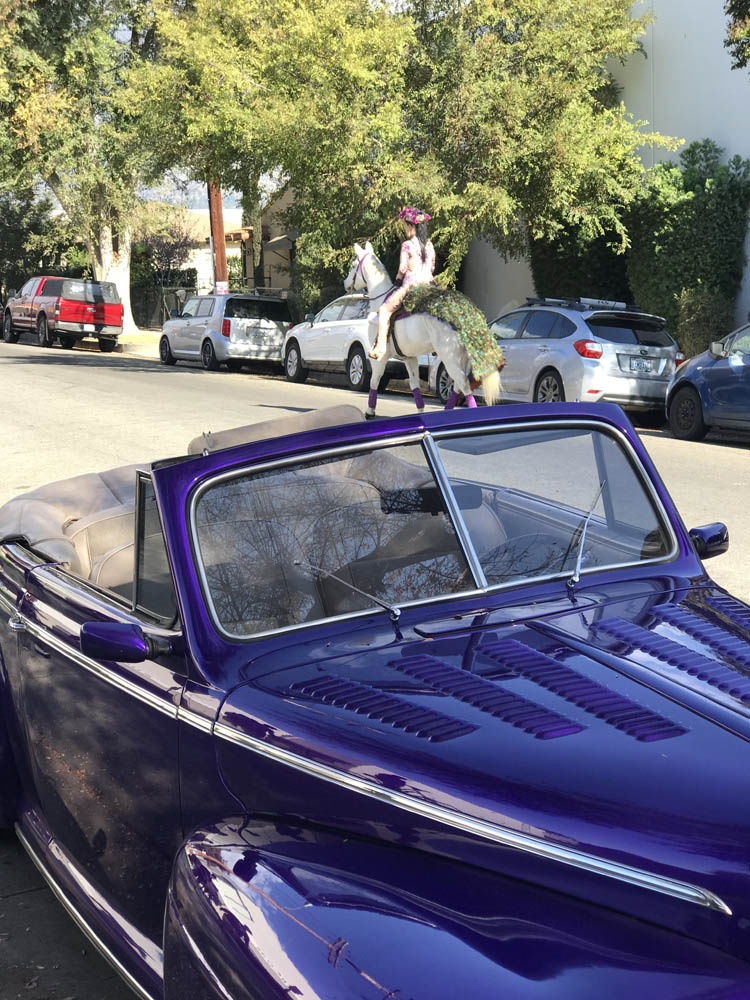 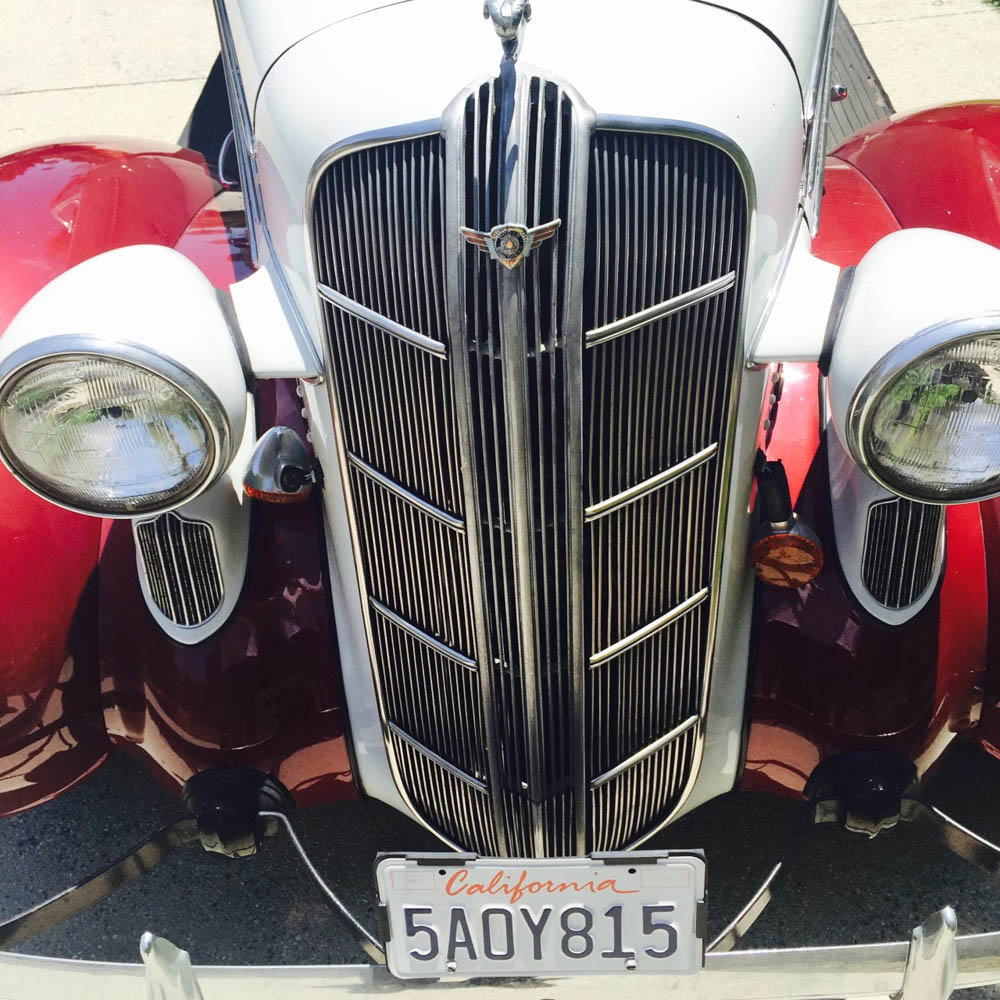 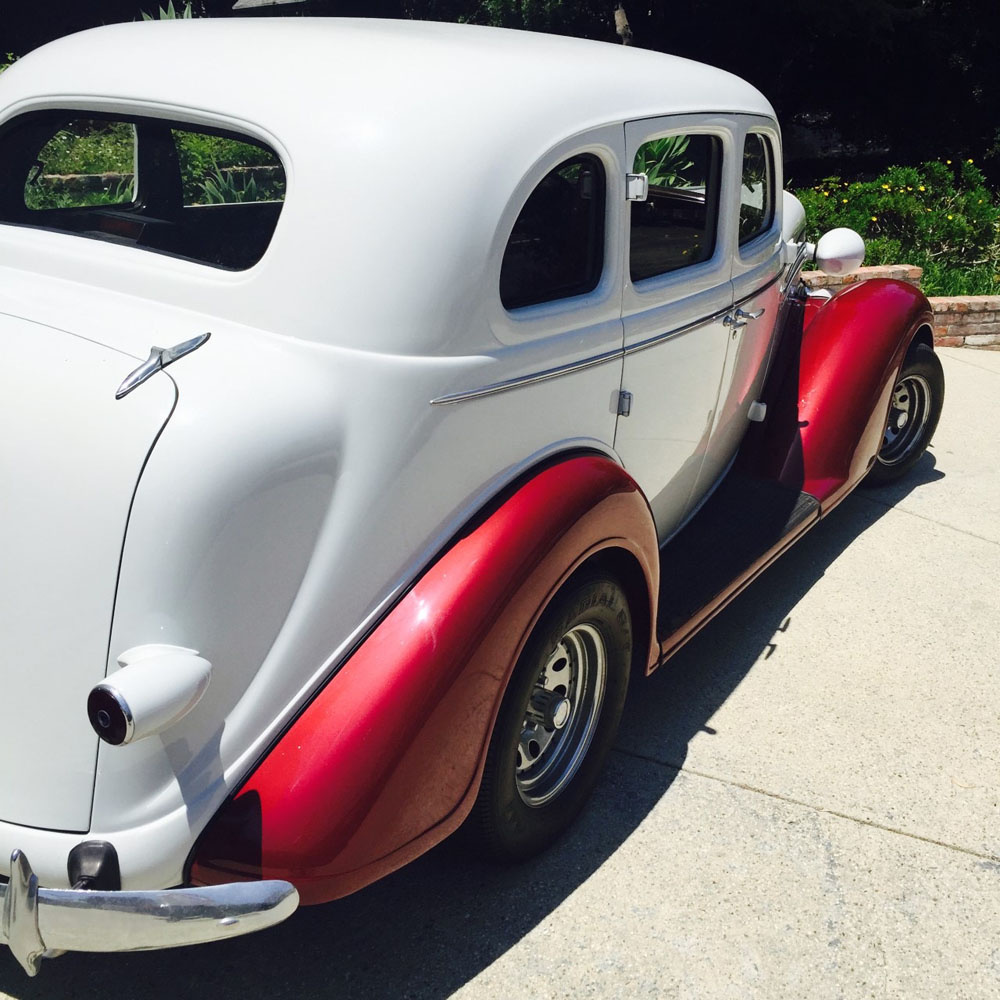 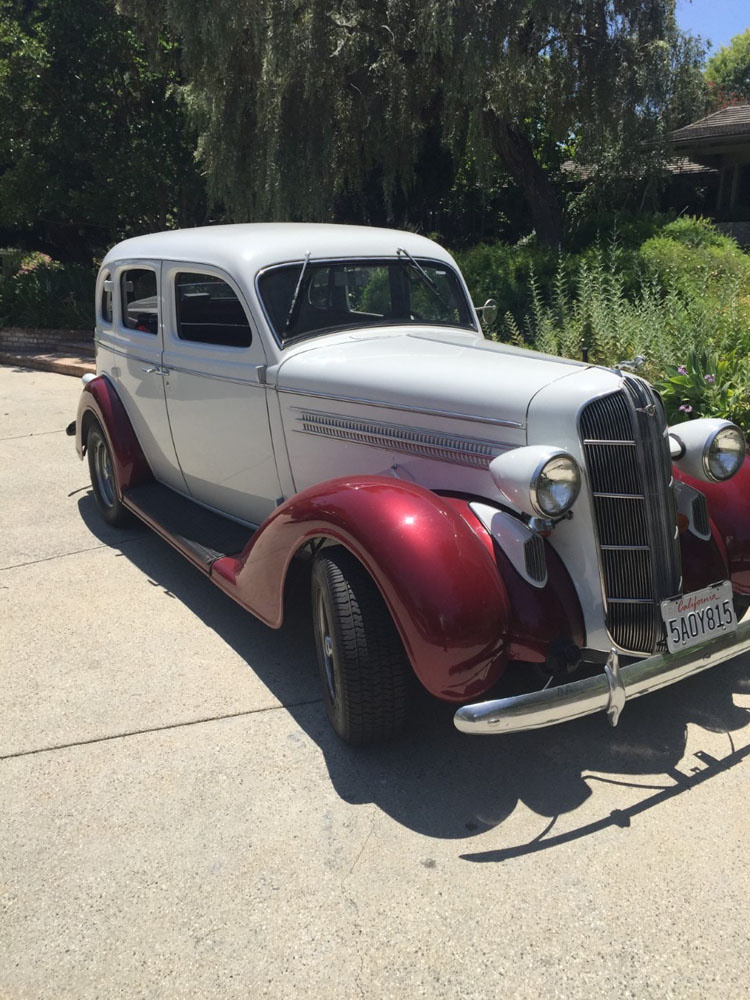 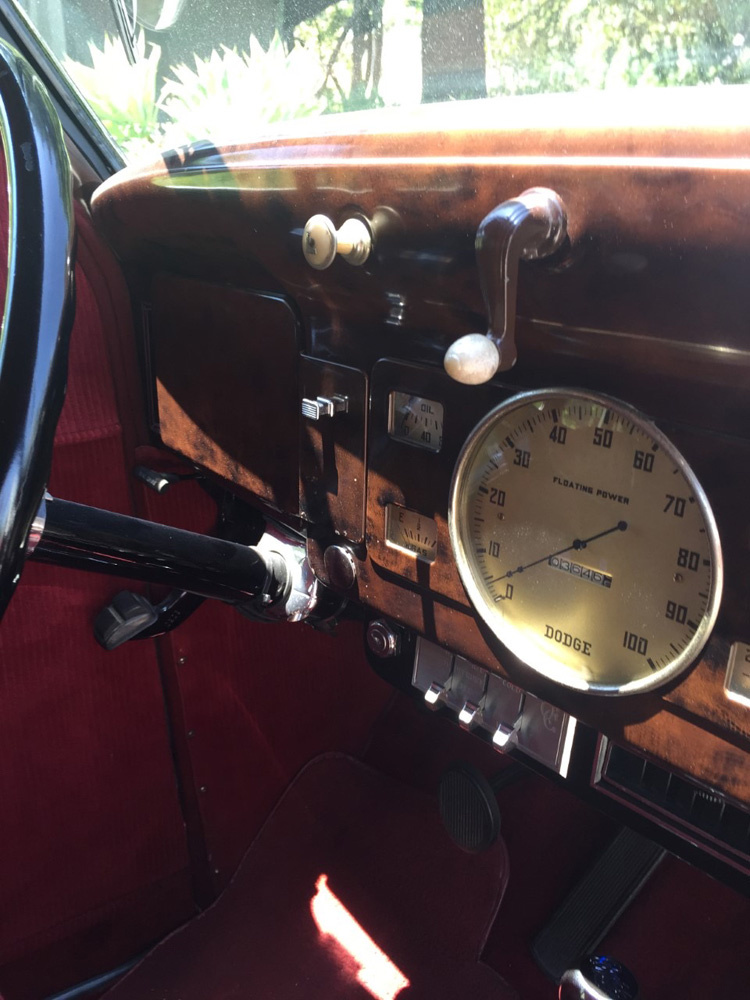 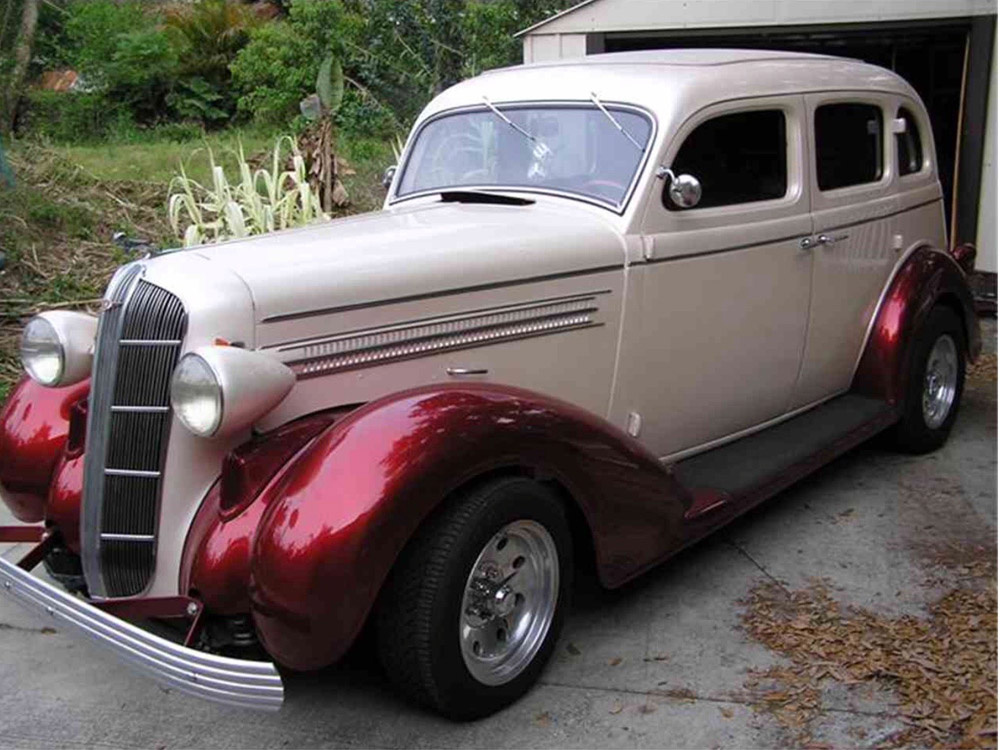 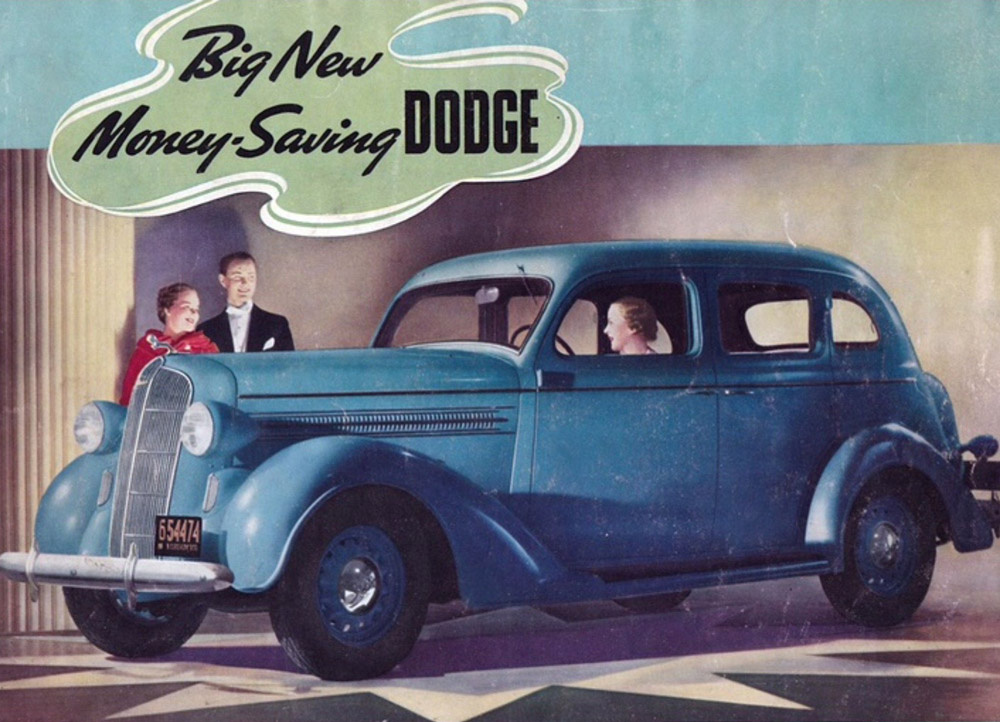 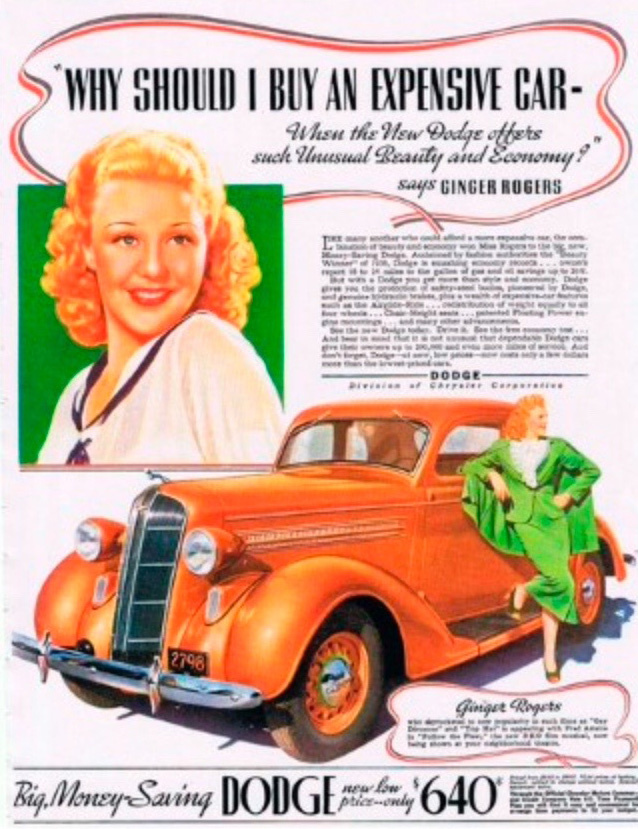 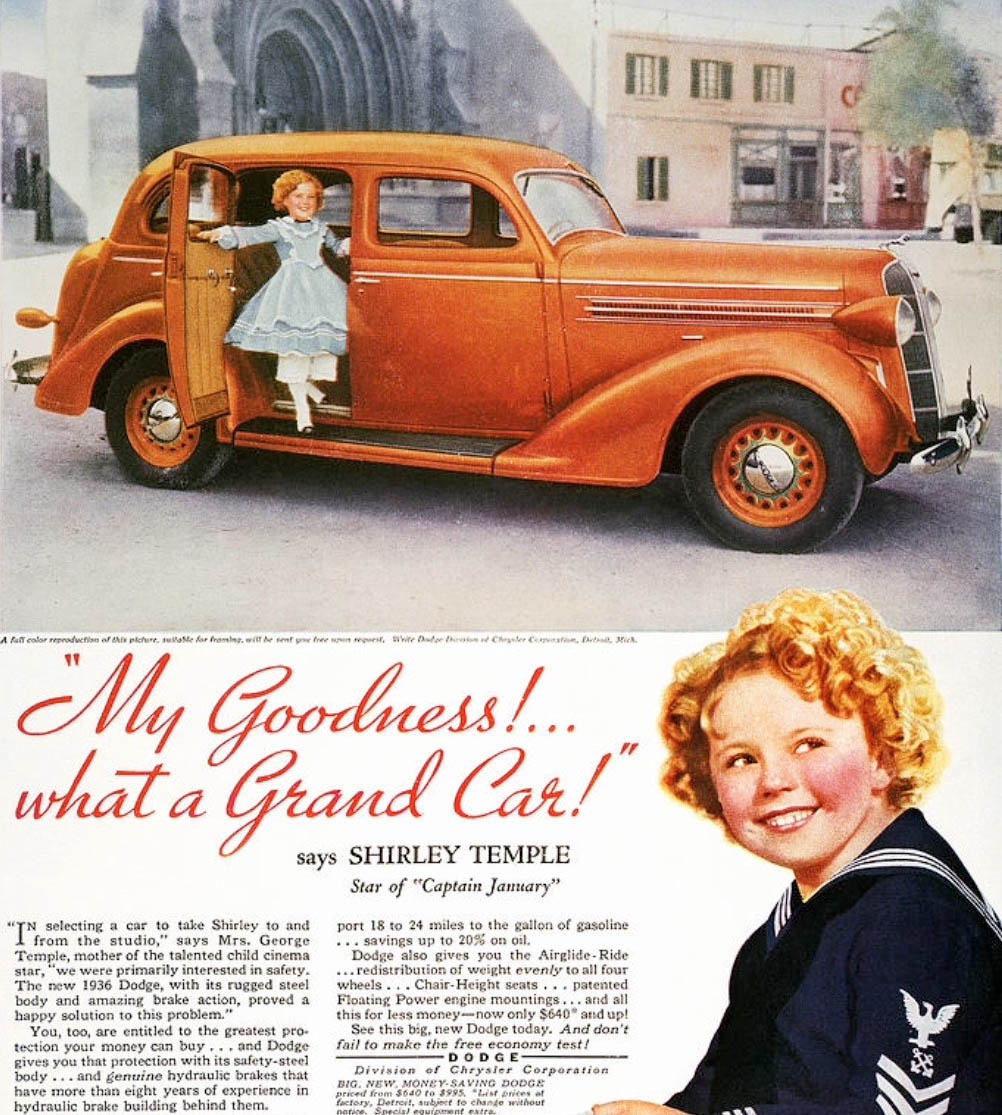 Named the “Beauty Winner”by the Dodge company, the 1936 Dodge made significant changes compared to the 1935 car.

This 4 door showed a roomier interior with chair height seats , rounder convex radiator grills, chrome striping along the hood and more aerodynamic lights. The suspension was improved and the headlights were upgraded for safer night time driving.

In 1936, The world was struggling to come out of the Great Depression, unemployment still remained at 16%, Germany hosted the XI th Olympic Games, the rights to the games were won in 1931 before Hitler rose to power . Berlin wrestled the right to host from Barcelona, to which Spain boycotted the games.

Hitler wanted to forbid any country that was not of Aryan decent from participating. Faced with the threat that every country would boycott, he backed down.

Jesse Owens won 4 gold medals in track and field, besting the Germans who managed the bronze medals. Hitler was not pleased and refused to shake Jesse Owens hand.

Other events in 1936 included the inaugural sailing of the Queen Mary, the Hoover dam was completed and King Edward VIII abdicated the British throne to marry the twice divorced American ,Wallis Simpson .

All of our cars are rented with a chauffeur and options to add on are individualized.

Why You Should Rent a Vintage Car for your Wedding Day

You’ve gone to a lot of effort leading up to, and on your wedding day. It seems a little anti-climactic after to show up in the family car.
Here are some reasons why you should rent a vintage car for your wedding day.
It’s glamorous, stylish and classy.
Make that grand entrance to and from your ceremony! Plus, you already look like a million dollars and you deserve to be driven around like royalty.
Photos!
It will make for some stunning photos. The photographer will already handle the photos of you inside the car and getting out of the car, but you should also be sure to ask for some photos of you and your partner with the car. Why not?
So fun for a car fanatic!
Maybe your partner is car-obsessed. What an incredible moment for them to choose and be invested in a car for your big day. Or maybe it could be a surprise wedding gift from you to them.
Pick your style and color
As a bonus most great car companies will have many styles, models and color options. This way, you can match your car to your wedding colors!

Those are just a couple of reasons you should rent a vintage car for your wedding day. Don’t miss this final detail when planning your big event!